This Quick Guide is intended to provide information about the considerations and processes required to implement a backup strategy using the NDMP protocol with Enterprise Bacula backup software. It introduces several techniques and strategies for backing up NAS filers using the NDMP or NFS/ CIFS protocols with Bacula Enterprise Edition, including granular single file restoration and NAS snapshot capabilities [1].

There are a number of NAS Lines approved for use with the NDMP Plugin, among others:

The current version of the NDMP plugin also supports DataONTAP version 7.3, 8.0, 8.1, 8.2 and several other NetApp vendors.

According to Figure 1, there are several protocols that can be used to back up NAS equipment. NDMP is generally better, because using NFS or CIFS to present files for backup is very slow, especially when dealing with millions of small files. Directory scanning and network latency tend to dramatically decrease backup throughput. Using the NFS or CIFS protocols to perform a complete restoration on a large NAS can be very time-consuming, especially in an urgent disaster recovery situation.

Backing up with the Bacula NDMP Plugin

NDMP has the main advantage of speed over NFS / CIFS protocols for backing up NAS volumes. The most important thing to understand about NDMP is that it is a control protocol, not a backup format. The backup format of the NDMP is arbitrary (implementation-specific) and individually defined by each storage platform vendor. Thus, in general, an NDMP backup made to a vendor’s NAS can not be restored to a different vendor’s NAS can.

The Bacula NDMP plug-in triggers snapshots on storage devices and generates backups within Bacula’s standard backup data stream, allowing it to be multiplexed with other backup streams and all advanced features. Within the saved data stream that contains this NDMP stream, the actual NDMP data remains opaque (vendor-specific, sometimes proprietary format). Attributes such as ACLs are included in the backup stream and handled correctly by the NAS vendor for backup and restore.

It is possible to perform a single file restore using the single item restore technique (use_hist option). Restoring a single file with the NDMP plug-in is also possible by restoring the NDMP data stream on a local machine (the same as Backup with NDMP has the NDMP plug-in) and opening the resulting file. This requires that you know the data format of the vendor and have a program that can read it. As it involves restoring the entire backup and extracting the desired files, the latter is not very efficient.

On NDMP systems that support DAR, the use_hist plugin option can be used to enable the “Single Item Restore” feature. With the use_hist option, all filenames included in a dump are stored in the Bacula catalog, and a restore session will have the ability to choose individual files or directories to be restored. Only selected files are restored to the target NDMP system. The correct dump file is selected automatically during the file selection process.

The Bacula Enterprise Edition NDMP plug-in consists of three files that must be installed with a File Daemon running on the same server that is running a Bacula Storage daemon that will store your data. This avoids sending backup data over the LAN from the file daemon to the storage daemon. You can install the NDMP plug-in on any other host, but doing so is less efficient because it will cause data to travel over two network links – once from the NAS to the File Daemon and another time from the File Daemon to Storage Daemon.

Binary packages are available for a limited number of platforms supported by Bacula Enterprise Edition. Please contact us to access them.

These packages will ensure that your version of Bacula Enterprise Edition is compatible with the NDMP plug-in and will install the bndmp and ndmp-fd programs.

Your File Daemon must have direct network access to the NAS, you can test the communication using telnet.

Note that NDMP, when doing the actual backup, connects back to the Bacula server. This may require that firewalls, including firewalld and iptables, be configured accordingly. Using the data_port_range option, you can control which TCP ports the NAS will try to use, allowing for a more restricted firewall configuration. When the network connection is not possible, the error NDMP4_CONNECT_ERR can be issued.

Depending on your configuration, you can set the authentication method to md5 or text.

The possible plug-in configurations are listed as follows.

The NDMP plug-in must be aware of the structure organization to detect whether the administrator wants to restore a new volume (where = / dev / vol_tmp) or within a subdirectory of the target volume (where = / tmp).

The NDMP Plugin will automatically detect the following structure:

If your volumes are using a different naming scheme, you must use the volume_format option.

For example, at NetApp, the volume format is:

The common part for distinguishing volumes and directories is /vol/. On Solaris and ZFS, volumes are stored in /dev/.

If your volumes are organized as in this example:

Volume_format must be configured with /FS – note that there is no final slash here!

As shown in Figure 2, if you have Bweb’s EBacula GUI, you can graphically configure the NDMP FileSet plug-in, and later a Job. 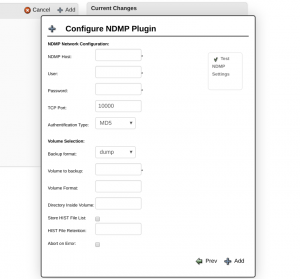 Back up everything in /vol/vol1 and/vol/vol2:

Backup of /home on volume /vol/vol2:

Backup of a specific snapshot to /vol/vol2

When using NDMP as opposed to volumes mounted by NFS/CIFS, the NDMP NAS software is responsible for backing up all information pertaining to files, including ACLs.

Note: the NDMP plug-in does not support FileSet’s “sparse” option.

If you do not want to expose the NAS password on the Plug-in’s command line, you can use an ndmp.conf file stored in the File Daemon, which will contain the credential information.
In the following example, the “root” profile will refer to the NAS host “nasbox”, the connection will use MD5 as the authentication method (“/ m”), the username will be “root” and the password will be “password”.

The format of the -D parameter is as follows:

In the following example, the profile “11” will refer to the NAS host “10.1.1.11”, the connection will use MD5 as an authentication method (“/m”), the username will be “root” and the password will be “My password”. A second profile “12” is also shown in this sample file ndmp.conf.

In the following FileSet example, two backups of NDMP plug-ins are configured – one for each of the two NAS profiles configured in the ndmp.conf example above.

The native dump format has a serious limitation of eight for the number of incremental jobs you can perform between two full or differential backups. Doing more than eight Incrementals will not allow you to restore your system accurately.

When specifying type = config as an argument of the NDMP plugin, Bacula will back up an overview of the configuration of all NAS volumes to the /@ndmp/.config file.

The main NetApp configuration file is located by default in /vol/vol0/etc. So, if you want to restore the NAS from scratch, you must include the /vol/vol0/etc directory in your backup FileSet.

The type = config option can also be used to check the network configuration and connection information between the Bacula Enterprise Edition NDMP plug-in and the NAS. If this backup job is not successful, check your configuration or password.

A sample of the NAS configuration output is displayed as follows.

To restore backup files with the NDMP protocol, you must select all files present in the /@ndmp/ virtual directory. You can change the where parameter to restore your files to an alternate location. However, the RegexWhere option is not available with this method.

The where parameter can contain a directory within the original volume or a directory within an alternate volume. The volume_format option allows you to configure how the NDMP Plug-in will distinguish between volumes and directories.

In the following example, if volume_format is /vol/, the NDMP stream will be restored to the /tmp directory on the “newvolume” volume.

In the following example, the NDMP stream will be restored to the original volume in the /tmp directory.

Restoring files without the NDMP host

In some cases, you can extract files generated by the NDMP host, first by restoring the NAS backup on your NDMP plug-in host machine and then using restore or tar. For this purpose, you can use the where = option during restoration with the following format:

The NDMP files would be extracted to the local /tmp/directory. (Note that the quotes in the example above should only be used when using the command line argument, they are not needed when editing options via the restore menu).

You can back up and restore entire volumes with the SMTAPE option using the path to the root of the volume (for example, / vol / foo). It is like backing up and restoring a hard disk partition using dd or partimage. Bacula does not need to know anything about the underlying structure of SMTAPE data, because when the volume is brought back online after the restoration, the archiver simply recognizes it as a WAFL file system and happily walks by.

To restore a NetApp volume with the SMTAPE option, you need to take the volume offline with the vol command on the NetApp host.

Then you need to specify where=/vol/vol1 in the restore command.

Attention, with this method, any data in the volume would be overwritten by the data saved previously.

Backup Considerations Using NFS or CIFS as an Alternative

If you are unable to use the EBacula NDMP plug-in, some alternative considerations for NFS and CIFS mount backups are designed as follows.

In order to back up the file’s Access Control Lists (ACLs), you must enable ACL support in the mount command as follows:

You also need to add the ACL Support option to your FileSet:

Bacula Training in the Brazilian Navy