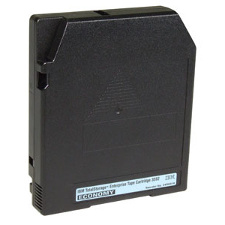 According to the Ultrium LTO [1] technology website, Linear Tape Open (LTO) is a high-capacity, single-reel tape storage solution developed and continually enhanced by Hewlett Packard Enterprise, IBM and Quantum. It’s a very popular, powerful, scalable and adaptable tape format that helps address the growing demands of data protection. The consortium states it’s also an open format, but there are only a few compliance-verified licensed manufacturers of LTO technology media are EMTEC, Imation, Fujifilm, Maxell, TDK and Sony [2].  All other brands of media are manufactured by these companies under contract [3].

As shown in Figure 1, each LTO new generation doubles media storage capacity and the current generation (eight) is able to store 12 TB of software already compressed data or up to 30 TB of hardware compressed only data. Virtually all LTO devices are compatible with the Bacula backup software. 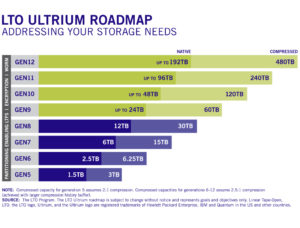 The LTO technology is used to backup up the largest workloads such as movie films [4]. The major studios and film archives largely rely on that tapes to preserve motion pictures. When the format first emerged in the late 1990s, it seemed like a great solution. The first generation of cartridges held an impressive 100 gigabytes of uncompressed data. Housed properly, the tapes can have a shelf life of 30 to 50 years.

One LTO problem is, each new generation that comes to the market makes an older generation obsolete. The manufacturers guarantee at most two generations of backward compatibility, and the studios probably have to migrate thousands of tapes manually every few years or risk losing access to the information altogether. The frequency of LTO upgrades is very high, and already there have been seven generations in the 18 years of the product’s existence.

As highlighted by Perlmutter [4], the vice president of global media archives and preservation services at Warner Bros.,
Steven Anastasi, says the practical lifetime of an LTO cartridge at approximately 7 years. After that, you must start migrating to a newer generation because it is usually a long process. While LTO data capacities have been steadily doubling, tape speeds have not kept pace with this evolution. Anastasi states: the first (LTO 1) generation had a maximum transfer rate of 20 megabytes per second; LTO-7’s top rate is 750 MB/s. Then you need technicians to operate and troubleshoot the equipment and ensure that the migrated data is error free. Migrating a petabyte (a thousand terabytes) of data can take several months, says Anastasi.

Still, LTO migration is a very expensive activity. In the words of Everett [4], from the University of Southern California School of Cinematic Arts, a recent project to restore the 1948 classic “The Red Shoes” from LTO-3 to LTO-5 cost something between US $20,000 to $40,000 just to migrate it. Now that the film is on LTO-5, it will soon have to be migrated again to LTO-7.

Different players provided alternatives to LTO. The IBM 3592 [5] is a series of tape drives and corresponding magnetic tape data storage media formats. The first drive (3592) and the next one (TS1120) were introduced under the nickname Jaguar. As of October 2017, the latest and current drive is the TS1155 Gen 6, when each cartridge is able to store up to 15 TB of data of software already compressed information with a data transfer rate up to 360 MB/s.

Unlike many other tape standards, the cartridges allow an extensive re-use of cartridges already owned [5,6]. Older generation tapes can be reformatted to higher capacities with every new drive generation, according to the table below. Cartridges are expected to operate in read and write mode across at least three drive generations. The observed media replacement rate in large archives is, therefore, lower than with most other standards. 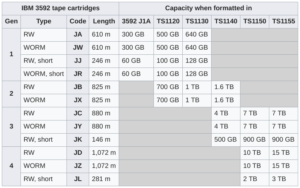 However, even IBM claiming the cartridges can be reused, the TS1150 drive cannot read or write to any Gen 1 or Gen 2 cartridges. And the TS1140 drive can read but not write to Gen 1 cartridges of any format. The media re-use perk has some restrictions, even though definitively more flexible than LTO standard.

Finally, it is important to state that our Bacula backup software is compatible with any of the LTO or IBM/Oracle Cartridges standards, achieving very high writing and reading performance. The companies are then free to calculate each standard ROI and decide what is the most efficient solution. Some Bacula Cartridges cases are commented as follows.

As exhibited in Figure 3, a university from Germany uses Bacula with the IBM Jaguar tape drives and is capable of achieving 200 to 300 MB/s throughput per tape drive without any tuning. The previously used backup software was using the six available drives but it was still a bottleneck for backup performance. With Bacula, the customer only needs three drives to comply with the backup window. 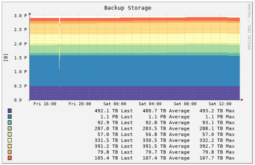 According to Bacula Systems [7], the National Aeronautics and Space Administration (NASA) is an Enterprise Bacula user that uses the Oracle StorageTek T10000C cartridges that hold 1.5 PB of backup data, protecting more than 300 scientific computing and mission support systems.