Use it to modernize your backup strategy, increase your data backup software efficiency, and significantly drive costs down. There is no taxation for backup size, number of used sockets, amount of storage devices or tape-library usage.

Bacula Enterprise has many advanced features, as follows:

Due to all these advantages, the Atacadão network (Carrefour group) chose Enterprise Bacula.

Atacadão is a Brazilian wholesale hypermarket. It was established by Alcides Parizotto and then became property of the Lima family and the executives Farid Curi and Herberto Uli Schmeil. In 2007, it was bought by Carrefour for R$ 2,2 billion Reals. In 2010, the company has 102 stores and 7 distribution centers in 23 Brazilian states. The company competes with Assaí Atacadista, Roldão and Makro. Atacadão also runs hypermarkets in 2012 to Colombia, Argentina and Morocco, where it is present along with its parent company Carrefour. <Wikipedia>

Carrefour S.A. (French pronunciation: ​[kaʁfuʁ]) is a French multinational retailer headquartered in Boulogne Billancourt, France, in the Hauts-de-Seine Department near Paris. It is one of the largest hypermarket chains in the world (with 1,462 hypermarkets at the end of 2016). Carrefour operates in more than 30 countries, in Europe, the Americas, Asia and Africa. Carrefour means “crossroads” in French. The company is a component of the Euro Stoxx 50 stock market index. <Wikipedia> 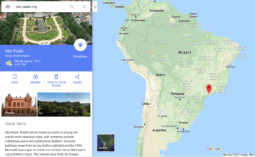